What are your Thoughts on Ageism During the Hiring Process?

Across LinkedIn’s various message boards, thousands of discussions get started every single day in an attempt to stir up interaction based around relevant workplace topics. While questions posed may be striking in their own right, discussion often tends to tail off after a few replies. A week ago, safety professional Dave Weber posed a question on ageism in the hiring process amongst safety managers; the discussion did anything but “die out.” 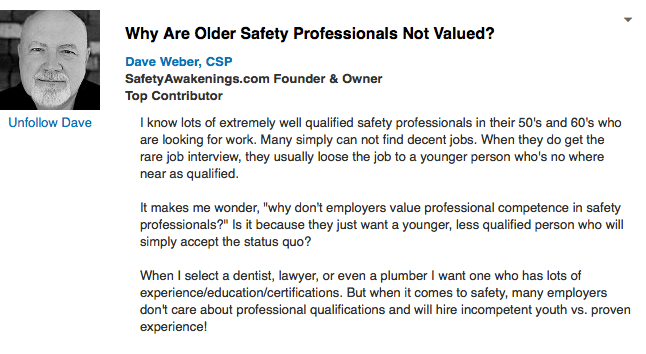 The original post illustrated a struggle to find work for older environmental health and safety (EHS) professionals. The poster asked what, if anything, others had noticed and if they found themselves in the same boat.

Through the woodwork came a handful of safety workers of varying ages with their own experiences to share. Their own stories almost universally confirmed the existence of some sort of hiring bias in their field related to age.

While some were content with a little bit of (possibly justified) indignation, others tried to dig to the bottom of the issue by rooting out exactly why this might be. In this article, I’m going to compile some of the best points in a coherent fashion to help EHS professionals get an idea of what they’re up against as they age.

All Professions Are Not Created Equal

The discussion starter raised the point that when selecting who healthcare professionals, like doctors, dentists, and surgeons, we tend to prefer those with more experience under their belts. While this appears a valid point, there are three main ways I can see in which drawing this comparison isn’t accurate. Furthermore, professionals struggling to find work should know these points so that they don’t leverage them in the wrong ways in interviews and resumes.

Alright, now let’s look at how we can help employers address some of these negatives and realize our value as an EHS professional in his or her 40s, 50s, and 60s onward.

One of the most commonly proposed reasons older professionals might not be hired was that employers were afraid they may shy away from new and potentially more effective techniques and systems. According to one poster, this idea seems to be largely an issue of perception.

How people actually behave varies greatly despite whatever their physical age, but if employers perceive you as ‘old’ they may attach some negative perceptions. Here are a couple ways to get past this:

In the end, the game is about framing yourself in the best light, highlighting strengths and minimizing weaknesses, just as it has always been. While it may seem an uphill battle as time goes on, staying current and knowing how to portray yourself as such will take you far, just as it always has.

Is your facility prepared for a fire?