North Pole Looks To Step Up Safety In A Big Way

In a last minute attempt to increase safety for the upcoming big day, a certain resident from the North Pole made a rather large order on some of the most important products in occupational safety. The order or should I say, “list,” came in late Monday to the folks at Creative Safety Supply with a note attached to “please rush.” The customer service representative from the company was caught of guard a bit, but with a little will and determination, he was able to provide the big guy in the North Pole with his demands.

I was like… I got this, I can’t let the big guy down or the rest of the world for that matter! Safety is extremely important to me and to know that the big guy is taking his safety measures to the next level… is really heartwarming.

Rumors have swirled in years past regarding injuries and near miss reports from the North Pole. OSHA has kept a tight lip on the situation, but this recent turn of events made it clear that team from the North Pole was not about to let anything get in the way of their mission or their safety record.

Well he’s no spring chicken you know! We got to protect the guy, he’s just been too careless in recent years and his safety, along with ours has become a top priority. 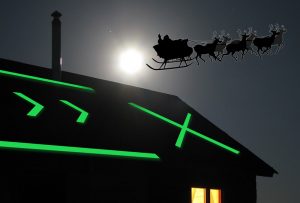 The biggest chunk of the order was for 856,244 rolls of SafetyTac Glow Tape. The tape is well-known in the industry to be the go-to tape in low-lit or even dark areas of the work place that need to provide important information when the lights are out. It’s made from the same tough material as the other SafetyTac Floor Tape and can provide up to eight hours of illumination, when you need it most –like when trying to land on roof tops.

Lets face it, Rudolph’s nose has been dull for years and the big guy just refuses to wear his glasses when driving, and don’t get me started on corrective surgery — apparently some are too good for it. This glow tape stuff was a life saver and should save us from having to replace tons of chimneys and roof decorations that we’ve had to in years past.

Santa’s team plans on marking rooftops with the glow tape in order to give him a safe and visible landing strip this year to avoid any accidents. The team feels the tape will not only increase their safety, but also cut costs, and improve efficiency.

In certain cases, there’s no place for the big sleigh to land. In a pinch, the team must hover and swoop in by ropes. Without a safety harness though, this has the potential to end badly. Safety Harnesses are an essential part of anyone working from heights. Accidents can happen in a flash and when you’re at an elevated position, the worst is to be expected.

Apparently this was news to Bud-e.

What? They make things like this? Are you kidding me? You know how many fallen soldiers we’ve lost out there?

Creative Safety Supply was able to fit the team with 27 Miller Revolution Construction Harness’s for the elves and one extra large, custom sized one for the big guy. Hopefully, this will be the last we hear of any “fallen soldiers.” 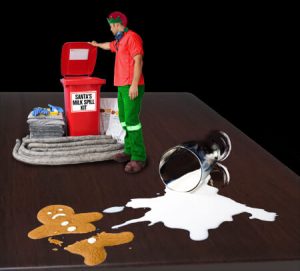 No Sense Crying Over Spilled Milk

When Mr. Jones got to the next item on the list, he was a bit puzzled.

According to an unidentified and unreliable source, the team had over 42,000 spill incidents to clean up last year alone. That amount would leave some to question what else the big guy was drinking that night, but the North Pole has assured us, the eggnog was clean.

Look, we don’t even ask questions anymore. We just send in the spill team and move on.

The end of the list was clear in sight, when suddenly, Mr. Jones was met with quite the delight. 42 LabelTac Printers to fill Santa’s order oh my! Quick to the shelves. We must help Santa’s elves!

When it comes to industrial label printers, there’s only one and our friends from the North Pole were smart to add it to their list. When organizing your safety efforts, a visual workplace will help reduce mistakes, improve safety, increase efficiency, and help keep everyone working towards the same goal. The LabelTac Industrial Printer is an important part of anyone’s safety effort, including Santa’s.

It wasn’t just about visual safety, you know how many times the big guy grabbed the wrong sack last year? Guess who had to jump down the chimney afterwards to fix it?

The LabelTac printers will allow Santa’s little helpers to quickly print labels on demand and with the added battery packs, the crew can print labels from anywhere, at anytime.

Mr. Jones was sure to check the big list from the North Pole many times. With a little help from his friends at UPS, Creative Safety Supply was able to get Santa his safety supplies in time for the big day, ensuring this Christmas will be the safest and most efficient one the North Pole has seen in years.

When reached for comment on the sudden focus on safety in the North Pole, Santa was unavailable, but a guy in the mall dressed up as the big guy had this to say:

Strain, Sprain, and Ergonomics in Construction

How to Use Industrial Hygiene to Improve Worker Health & Safety