When a company gets into trouble with OSHA regulations more than once, it’s possible to end up in the organization’s Severe Violators Enforcement Program, which focuses on employers that repeatedly disregard safety measures. This happened to Formed Fiber Technologies, a business that manufactures vehicle interior trimmings for automobile makers like General Motors and Toyota.

OSHA had visited the company more than once (16 times prior to 2013, which resulted in 80 violations). After an inspection in late 2013, the company provided false documentation stating hazards related to machine guarding had been corrected, and at a follow-up inspection in January, OSHA found the hazards remained.

The agency recently fined Formed Fiber Industries a total of $816,500 for a list of failure to abate, willful and repeat violations related to working around machines.

“Formed Fiber Technologies apparently decided that production was more important than ensuring its workers’ safety,” Dr. David Michaels, Assistant Secretary of Labor for Occupational Safety and Health, said in a press release. “They provided false abatement documentation to OSHA. They knew how hazardous these machines were without proper safeguards and also knew exactly how to fix those hazards. OSHA will not tolerate such blatant disregard for worker safety.”

The company received a failure to abate citation—meaning they did not fix hazards that were observed previously—for not providing proper machine guards around dangerous equipment like hydraulic presses. OSHA also issued nine willful citations (because the employer knowingly disregarded safety measures) for failing to prevent the startup of machines during maintenance and four repeat citations for failing to train workers about stopping machines to avoid hazards. The machines that posed hazards also didn’t have proper warning information posted on them.

Hazards related to working around machinery are especially dangerous because they frequently result in amputations, so OSHA takes these hazards seriously. The failure to protect workers from these machines was among the top ten most frequently cited standards by OSHA in 2013.

In the case of Formed Fiber Technologies, the company neglected standard safety measures. Perhaps the manufacturing process moved faster without the safeguards or the costs of implementation seemed high. Neither of these reasons is an excuse for noncompliance, though.

So what could a company with similar safety issues do to avoid a situation like the one Formed Fiber Technologies finds itself in? There are three main steps that would resolve safety issues.

Machine guards around the hazardous parts of machines—often the moving parts—are necessary to prevent an employee’s hand, for example, from getting crushed. Many types of safeguards exist for use with hydraulic presses and similar equipment, and OSHA explains three viable types in its Machine Guarding eTool.

Barrier guards, which surround the moving pieces of the machine, prevent the operator’s arms from entering the dangerous area. Two-hand tripping devices require an operator to press two buttons (spaced fairly far apart) simultaneously to activate the machine, which means the person won’t be able to have arms or hands in harm’s way. Electronic safety devices like presence sensing devices stop a machine when someone moves within the sensing field. These devices are sometimes called “light curtains,” and according to OSHA, this type of machine guarding often receives the least amount of resistance from employees because it restricts their movements less than other methods.

While some employees may dislike machine guards because guards can make their jobs take longer or seem more difficult, they do significantly reduce the likelihood of injuries because employees won’t be able to reach into dangerous areas.

According to OSHA’s press release about the citations at Formed Fiber Technologies, “The company also failed to develop proper lockout/tag out procedures and encouraged workers to use unsafe methods to stop machines for maintenance.”

Lockout/tagout can prevent accidents during the cleaning or maintenance of machinery by ensuring that no one is still working in or near a machine when it’s started back up. Under a lockout/tagout plan, employees working on a machine would shut it down, isolate energy sources and apply locks or tags that prevent others from turning the machine back on until those specific employees have completed maintenance. 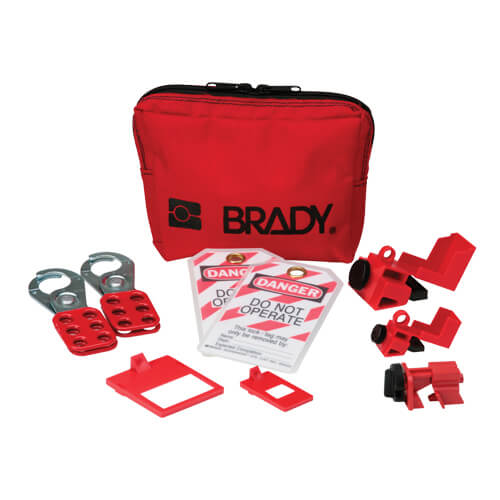 Taking the time to lock out a machine every time something needs to be fixed may seem like a hassle, but these procedures are the best way to avoid accidents related to machines accidentally starting up.

Employees must all be trained in how to follow your company’s procedures, and the policies must be enforced company-wide.

Implementing machine guards along with a lockout/tagout program will make working around machines significantly safer at your facility. Adding signs and labels identifying hazards will help reinforce your other efforts.

Visuals and text alerting employees to the type of hazard presented by a machine will help remind them to use caution. Labels on machines can also provide additional instructions about how to use a machine, where the power source is or what PPE is required for machine operators.

If you make safety labels in house with a label printer, you can customize them so they adequately explain the hazards associated with the machines in your facility.

These three strategies—machine guards, lockout/tagout procedures and safety signs/labels—can keep your facility compliant with OSHA regulations, preventing significant fines. By using these methods you’ll also reduce the number of accidents that occur at your facility, which will make everyone in the organization happier.