It’s that time of year again. No, not the last minute shopping, wrapping and list checking, but the aches, pains,  coughing, and nausea induced flu season that haunts us, year in and year out.

It can come at a moments notice. Just ask the folks I work with. Last week we had a construction team in to do some work on part of the facility. One of the construction workers was visibly sick and left more than we bargained for. Our organization has had six employees call in sick over the last two days with flu-like symptoms, me included.

How Much Does The Flu Cost?

-Charles Gerba, professor of microbiology at the University of Arizona 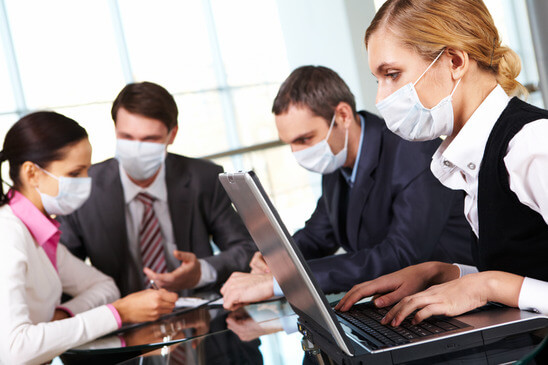 Unfortunately, sick days are just not an option for some. In fact a recent survey done by Staples revealed that nearly 90 percent of office workers admitted to showing up for work, even when they knew they were sick.

Why you ask? They didn’t want to fall behind. About half, excused their presence due to their workload and their trek in, was necessary to keep up.

How productive can a sick employee really be?

Gerba points out that no matter how important people might think their work is, their germs they will most likely spread, will undoubtedly make others sick, causing more harm than good to the organization. Germs can be spread quickly and easily. From the front door handle to the coffee pot, germs are potentially everywhere, especially during the flu season. Gerba also points out that viruses can last anywhere from a few hours to 30 days.

The medication makes me feel better.

True, the medications may make you feel better, but they could actually result in a lower level of production and quality out of you, leaving you with even more to catch up on, when you’re healthy again. Also, by masking your symptoms with medications, you can actually prolong the illness by overexerting yourself.

We see a lot of worsening symptoms because people will just not stop and rest. What they don’t understand is that they’re pushing themselves to the point where they’re actually a lot sicker at the end of two to four days than they would have been if they had just taken that fist day off and let their body fight the infection.

Tips To Get You Through Flu Season

Strain, Sprain, and Ergonomics in Construction

How to Use Industrial Hygiene to Improve Worker Health & Safety