Rules. They’re everywhere. In the workplace, especially, they can also be critical to the safety of workers and guests/customers alike. Even so, rules are broken every single day, sometimes with dire consequences, and many times without. Why do we break the rules? That questions was posed as a theoretical article from Phil La Duke several years ago, and it offered some interesting insights into why some rules work and are followed, and why others don’t and are not. Recently, La Duke revisited his popular article with an addendum that he posted for a LinkedIn group in which he is a regular contributor. The article garnered several responses, most of which just agreed with the sentiments La Duke had expressed. Others, however, tried to chip away at a key subject never explicitly explored in La Duke’s own article: If we know why rules aren’t followed, how do we use that information to increase compliance and change rule perception for the better? That question is the topic of this blog post, and hopefully you glean several ways in which compliance can be increased for a given rule. 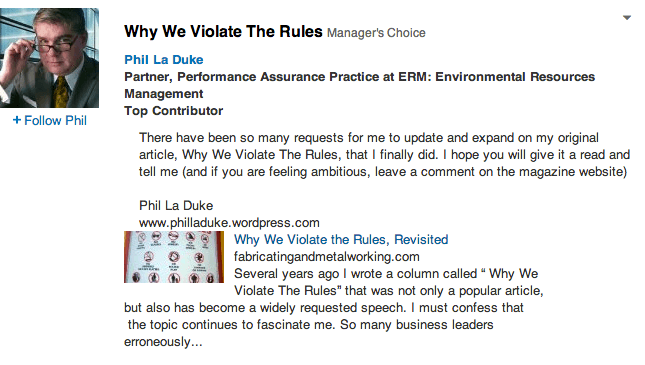 One of the biggest insights in La Duke’s writing is the concept of value-based rules and compliance-based rules. In a nutshell, value-based rules are rules in which an overarching moral or popular idea is used to justify certain guidelines. For example, not walking in front of a moving car in the work yard is fairly value-based: People want to live, and a car running someone over is counterproductive to that goal. People don’t have to be incentivized to obey such a rule, because they already value staying alive. On the other hand, we have compliance-based rules. Compliance-based rules are followed for the primary purpose of avoiding some kind of known punishment or consequence. To explain this, La Duke uses the idea that many people speed while driving as they don’t feel morally wrong doing so, but will slow down when they perceive they could be pulled over and fined.

In many cases, the line between the two types of rules lies only in perception. In our example above, the underlying value of speed limits is to avoid injury and loss of life, but driving slightly over a given number isn’t perceived by drivers as a big enough threat to make them follow the rule for its own sake without the threat of punishment. The fact that this distinction can be so easily blurred is actually a good thing for employers trying to increase compliance, because you often don’t have to dig too deep into established rules to find an easy-to-relate-to underlying value. One of the best things you can do, as pointed out by one LinkedIn commenter (Mike Maloney), is to help employees see the underlying value in a rule:

“Compliance for the sake of compliance will always be a struggle. To get the front-line worker to comply, you need to educate them to what’s in it for them. During orientation classes, I discuss the reasons for the rules. New hires usually give “OSHA” as the reason for the rules. I talk with them about getting to go home intact at the end of the day as the real reason.”

As anyone with children can tell you, “I told you so” isn’t a justification that carries weight for long, and employees are much more likely to be safer in the ways you want them to if you talk with them and help them to see value in the rules you enforce.

Another great point made in the discussion is that too often the values or goals of a company can be at odds with the rules, this is especially true when reward or incentive systems are at play. For example, let’s say you take your most productive three employees out to lunch at the end of each month, based upon the number of units they’ve moved/created/etc. Basically, the incentive your employees see is to work fast. Now, let’s say that the various stations throughout their day require changes of personal protection equipment. It won’t take long for workers to figure out that their numbers are going to look better for the bosses if they bypass tedious safety gear changes and just work as quickly as they can without making mistakes. In this example, you’ve created a situation in which workers are rewarded for work habits which may favor their bypassing of the rules.

These situations are extremely common and should be remedied by offering alternate measures of success or by stipulating that rules must be followed. The latter can quickly turn what should be a value (the safety of workers’ eyes, hands, etc.) based rule into a compliance-based one, however, so be sure to have open discussions with your workers as to why any rules or stipulations are important to their well-being.

Remember, rules are ultimately about reducing variation and unexpected circumstances; when surprises are less likely, people are less likely to die or get injured. Always do your best to evaluate the value behind any rule and, if you can’t find any in it intrinsically, consider removing or at least replacing it with a more effective, appropriate alternative. Compliance ultimately boils down to how important the rules are to you, and then how well you can relate this sense of importance to employees.